How to boost the patient’s own ability to heal wounds

There are generally 3 overall factors influencing the outcome of wound healing:

When it comes to the actual closing of a wound, this is performed by the patient’s own repair function and immune system.

Many associates growing old with impaired hearing and sight, moving around more slowly and maybe even some aches and back pains. This is also true on a cellular level where as we grow old our immune cells tend to be less responsive to environmental stimuli, proliferate more slowly and sometimes even being dysfunctional (Zykova et al., 2000). This manifest itself in an impaired ability for tissue repair, resulting in slow healing wounds that frequently become chronic. Additional age-related conditions such as vascular deficiencies and diabetes augments the above-mentioned effects. Thus, even if the most competent wound care specialist is administering the best possible therapy, they still rely on the patients’ health and immune system to close the wound.

Traditionally, wound treatment consists of facilitating the immune systems own ability for repair by removing necrotic tissue, providing a balanced moist environment, control microbial burden and the use of compression or offloading as required, known as standard care. In many cases this is not enough. This has led to the development of active therapies to be used when standard care is not working which can interact with the cells and molecules that makes out the wound healing process and thus influences the patient’s own ability for healing. Woulgan is an example that addresses the healing process.

Soluble Beta-glucan (SBG), targets a key immune cell – the macrophage responsible for coordinating and orchestrating the whole wound healing process. Dysfunctional macrophages from age and comorbidities such as diabetes, respond to stimulation with Beta-glucan which restores their functionality. In practise this means that the healing is re-set in these wounds and as the macrophages after activation with Beta-glucans are more capable of finishing the coordination of the healing process until closure, the chances of complete healing increases.

Beta-glucans has been used for medical purposes in the Far East for more than 2000 years. These compounds have been recognized in the Western medicine in the last century as a result of their ability to modulate the innate immune system, particularly through the action on white blood cells (monocytes and macrophages). Beta-glucans are long-chained polysaccharides which can be found in the cell walls of yeast and fungi. Their conserved structure harbours molecular motifs referred to as Pathogen-associated molecular patterns (PAMPs). Our immune system have through evolution learned how to recognise PAMPs as danger signals for impending attack, and will upon recognition start appropriate counterattack mechanisms. PAMP recognition occur through specialised receptors on the cell surface of the macrophages, that bind to the Beta-glucan PAMP motif.  This binding activates the cell, increasing its phagocytic capabilities and the production of specific signal molecules and growth factors.

When macrophages are activated by Beta-glucan they will be much more efficient in their phagocytic capabilities and bacterial killing, thus cleansing the wound of dead cells and pathogenic microbes (read more about this here). The activated macrophages from Beta-glucan stimulation will express a range of growth factors supporting cell proliferation, angiogenesis and deposition of the extracellular matrix. Also, a selection of cytokines is released that will signal myofibroblasts to increase wound contraction and support re-epithelialisation by epithelial cells. In terms of wound healing this means that the resident macrophages in slow healing wounds restores some of their original functions and are more capable of finishing the coordination of the healing process, including sub processes, until closure after activation with Beta-glucans. 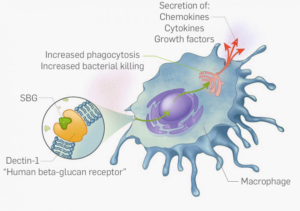 How does Beta-glucan compare to other active therapies?

An advantage of using Beta-glucan to treat slow healing wounds over for instances MMP modulators, cellular therapies or growth factor supplements, is that macrophages function at an overall level and thereby correcting multiple molecular factors in the wound bed. Thus as a clinician you don’t really need to know the specifics of the molecular imbalances in the wound as the activated macrophages will take care of a range of these factors. Also, being a polysaccharide beta-glucan will not be degraded by MMPs present in the wound and is not allergenic to the patient. In addition Beta-glucans are stable polymers which can be stored at room temperature. It comes in an easy to use gel format that don’t require specialist training or procedures to use, enabling both generalist nurses and patients themselves to apply it.

Find out if you need to escalate your treatment plan here 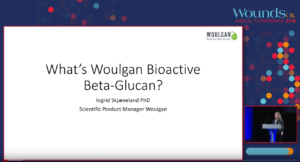