It all started with Murphy’s law

Serendipity can be said to be at play when researchers, looking for a solution to a problem, unintentionally uncover the answer to something else.

This is exactly what happened in Tromsø, a town far north in Norway, in 1987. Jan Raa is a Norwegian microbiologist that worked as a professor at the University of Tromsø for many years. He also received an honorary degree from the same university in 2006. Fun fact; waste from beer brewing is full of nutrition – Jan Raa knew this, and he wanted to explore using the waste as a feed supplement for salmon to increase its growth rates. That way the fish could be harvested earlier making the fish farming more efficient.

To test his hypothesis Raa set up an experiment where fish were fed different additives, including the beer brew waste in different tanks. However, as often is the case in experimental research, Murphy’s law hit and the fish got infected by a bacterial disease and started to die, ruining the experimental setup. However, some of the fishponds showed a significantly lower death rate than others. These fishponds had been fed the formulation containing waste from beer brewing. This spurred Raa to test whether the waste contained substances that affected the immune system, making the fish more resistant to the disease. He paired up with Professor Rolf Seljelid working within Immunology and together they discovered that it was the substance beta-glucan that was responsible for the increased resistance to bacterial disease in the experimental design with salmon.

Tweet this: Failed experiment paved way for the discovery of beta glucan’s activation of #macrophages in #woundhealing via @woulgan

The collaboration between Raa and Seljelid continued and they discovered that the beta-glucans affected the immune system through stimulating macrophage activities. In 1981, Seljelid published their findings showing that β 1,3/1,6 glucans from yeast was superior in stimulating macrophages over beta-glucans from other sources and thereby enhance the body’s innate immune system.

Raa and Seljelids work was the foundation for the University spinoff company now known as Biotec Pharmacon where the production of yeast derived beta glucan has been perfected under the supervision of the chief scientific officer Dr. Rolf Engstad. The company was the first to develop a beta-glucan feed additive for fish farming under the brand name Macrogard which became the golden standard for feed additives in aquaculture. The company continued exploring areas where the beta-glucans macrophage stimulating abilities would be beneficial and products within cosmetics and nutriton were developed. The potential of the yeast beta-glucan seemed infinite, prompting ten years of extensive research and development, refining a pure and soluble form of beta-glucan called SBG which is the active ingredient in Woulgan, that is used to heal hard to heal wounds. 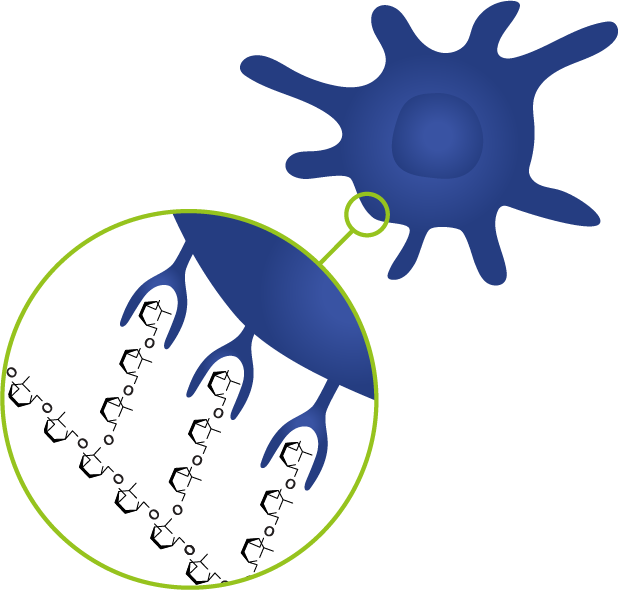